Unlike the Local Breakout scenario, by using the CCN CBO Hub, the carrier does not have to pay
roaming fees to the visited network for the use of their PDN gateway. In contrast to the Home
Routed scenario, by using the CCN CBO Hub, the carrier doesn’t incur any of the resulting latency
when routing the traffic back to the carrier home network. The CBO Hub provides an excellent
compromise between Local Breakout and Home Routed roaming scenarios.
CCN’s CBO Hub not only supports LTE but 2G and 3G technology as well. It is also a fully virtualized
solution. It terminates traffic regionally through locally distributed core network elements,
reducing both network complexity and routing. 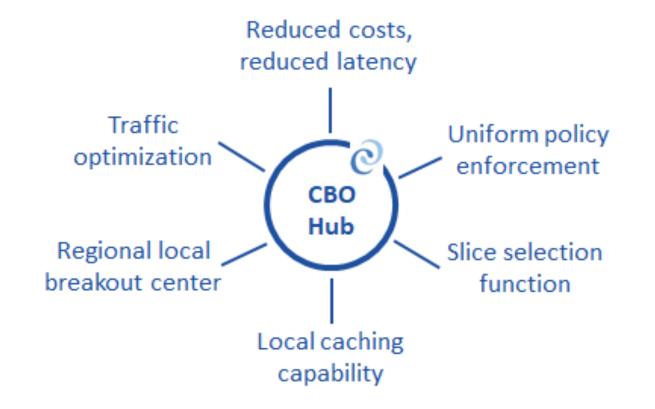 Traffic Optimization techniques reduce a CSPs roaming costs as they lower the throughput being
delivered to the roaming subscribers. The CCN CBO Hub offers the traffic optimization features
CSPs are looking for:

Greater Control of Your Traffic

With CCN’s CBO Hub, the home carrier is able to maintain control of their subscribers’ session. If there
are defined policies for a particular type of session or subscriber, these policies can be maintained by the
Carrier Breakout gateway in coordination with the carrier’s home PCRF.

CCN’s Slice Selection Function (SSF) can be deployed at the CBO Hub, allowing for network slicing.
The SSF uses control plane and policy information to identify and steer traffic to specific gateways.
This network slicing allows the creation of multiple virtual networks on top of a shared physical infrastructure.